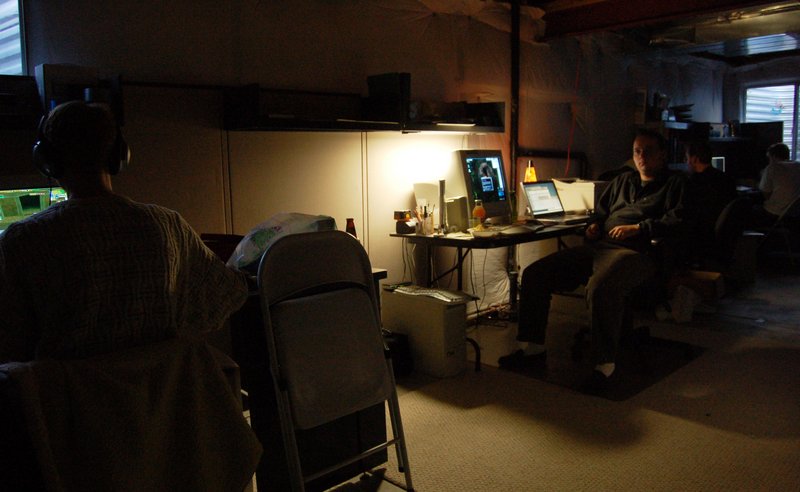 Jaeger: I think it's my turn to host. Which means I don't have to drive. :) Megafestors may be fascinated or apalled to know there's now a temptation zone open a few miles from my house, perfect for any last-minute electronics acquisitions. Or checking out products in meatspace before buying online.

Jaeger: The week between Christmas and New Year's is a popular time for Megafesting in Colorado. (Kiesa and I will fly to Portland Wednesday night, 20 December, and return Monday night, 25 December. My employer officially suggests taking Christmas and Boxing Day off, but since I'm hourly, I can work whenever I please. My self-paid vacation time allows me to take the rest of the week off, and return to work on Tuesday, 2 January 2007.) I'm also open to other proposals. I'm not aware of any events that would suggest scheduling a Megafest around.

Bitscape: I plan to be in Colorado during late December / early January, so that would work excellent for me. Update: Since official start / end dates have now been posted, I intend to arrive at the first night of the fest on the evening of December 27th, and leave on January 1.

Yanthor: Anya and I will be in Colorado around that time again. Sadly, Anya has to work New Year's _again_, but I'll be free for a great and grand New Year's Megafest. If we schedule it right, she might be able to be there for a few days before having to drive back to Nebraska.

Kiesa: Around New Years would work for me. I could definately take the long weekend but not sure I'll have any extra vacation time beyond that.

Humblik: Well, I think I could also make that happen. I will be spending Christmas with my folks. I'd mostly likely show up Dec. 27 and leave on Jan 1.

I'm having to watch my vacation and expenses much closer this year. I'm thinking about going on a 5-day cruise from Orlando and down through the Bahamas in February.

Jaeger: A cruise? Do tell more.

Humblik: Well, I decided against the cruise, but I'm considering Winter Retreat with Gehlek Rinpoche in February. It's not as expensive, but requires more vacation.

Bouncing: I'll show up on Wednesday to see what's going on.

Humblik: Eragon might be another movie that could be fun to watch on the fest.

Humblik: I am proposing to watch Eragon at 11:50 hours in Longmount on 12/28/2006. That's today for those not keeping track.  :-) This will make it possible for Anya to attend the viewing before heading home.

Could be nifty to make a supplies run afterwards.

Jaeger: Celestial Seasonings has a neat factory tour that shows off their tea production floor -- lots of moving parts, fun for the whole engineering family. I've probably been on the tour a dozen times in the past fifteen years. It could be an amusing diversion. (I drive by the factory every day on my way into work.)

Humblik: Ooh! moving parts. I like moving parts.  ;-) Are there Celestial beings there too? That could be an attractive marketing theme... When is a good day to go? I'm okay with any day that is convenient.

Jaeger: We'll need to rethink Movie voting. While you're at it, go watch The Transporter, an amusing Euro-fu movie.

Yanthor: I agree. The biggest change would be simply in definition. Rather than what movie to watch then, simply define it as what stuff you're interested in seeing during the whole fest--and use the voting to sample interest of everyone else in that particular item. I like at least getting together, watching trailers, and indicating interest. It broadens my horizons regarding films I haven't heard of. I'll be buying and bringing several DVDs special this time.

Bitscape: I have a proposal for a revamped movie voting system experiment. Rather than have everybody enter arbitrary floating point numbers to indicate interest, place a select box next to each movie on the user's voting screen with the following options: (3) strong interest, (2) moderate interest, (1) weak interest, (0) no interest, (-1) disinterest. For each movie, the user could pick any of the options with no limit on the number of movies to which a given value could be assigned. So, for example, if I wanted to, I could mark _every_ title on the list with a 3. However, this would have the effect of diluting my vote, as no movie would be given any more weight than any other. Determining the results would involve taking the sum of everybody's votes for each movie, and the movies with the highest numbers would be declared the winners. This scheme does increase the probability of a tie, but since we usually watch several movies over the course of a fest anyway, I don't see that as a significant drawback. If other festors are interested in attempting such a scheme, I would volunteer myself to implement code to make it happen. Should be a piece of cake. Then again, if ya'll want to use the old tried and true system, or some other variant, I have nothing against that either.

Humblik: I think that sounds interesting. It might interesting just to see how different voting systems work.

Whatever shape movie voting ends up in, it'd be handy for those planning on nominating a specific movie to know in advance whether that movie contains a trailer on the DVD. If you could hand me the DVD, I can rip the trailer, or find it online, and improve the throughput of the trailer-watching phase.

Thursday night, our scheme was for each of us to nominate one movie we wanted to see that night, with the understanding that we would revote on following nights. Having only five people and five movies helped, as well as my ripping the trailers in advance. (It turned out I had to transcode them; the Quicktime player on Sasami failed to play the mpegs I ripped straight from the DVD. After resolving that little hassle, it went well. (My new bad idea is to burn a cd with mpeg4 trailers and use my new DVD player to watch the trailers... which may be a bit easier to drive during the trailer-watching but a bit harder to set up.)

We didn't end up voting for movies after Thursday; instead, random Festors declared that they would be watching movies and anyone was free to join.

One potential improvement I would suggest would be to have a longer nomination phase, which resembles the old trailer-watching phase, in which Festors promote movies they're interested in watching at any point during the Fest. By watching more trailers, we would have a broader appreciation of the movies available.

In 2006, I rediscovered how to discover and buy new music, mostly thanks to podcasts of NPR's online music show All Songs Considered. I abandoned commercial radio as a venue for music discovery years ago, but that left me listening to the same old artists. Now I have plenty of music to listen to. I'm going to put together my own music awards, but it might be amusing to extend the voting to other Megafestors who may have their own musical-world-domination agendas to promote and see if we can agree on anything at all.

Humblik: I was listening to several of the songs they selected as well. Haven't been to the website yet, but heard a show they did about it.

These albums ended up in the rotation, nominated by Bitscape, Jaeger, and Yanthor: