Megafest 6.0 took place around Memorial Day 2007, hosted by Yanthor and Anya at The Republic of Haven. 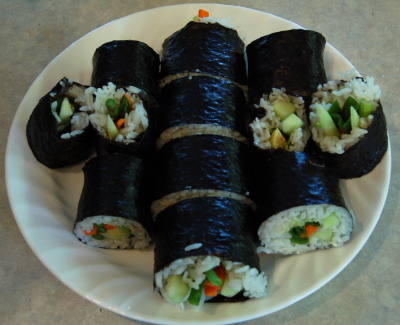 Like the last Megafest, we are implementing a slightly different movie voting scheme: Each night we choose to vote, everyone participating nominates exactly one movie they would like to see that night, and votes accordingly. We watch the first movie only. (Kiesa also proposed some sort of "endorsement" scheme, but since that would require actually changing the code, this seems slightly unlikely.)

Yanthor and Anya officially endorse the idea of hosting it at their house during the Memorial Day 2007 weekend. Yanthor officially suggests the dates of traveling to Lincoln on May 23rd and traveling home on Memorial Day, May 28th. If you have other suggested dates feel free to suggest them. Also, if you wish to arrive earlier or stay later than whatever the finally agreed dates are, Anya and I are open to it. We only ask that you discuss it with us first.

Jaeger and Kiesa will continue the trend of speaking of one's selves in the third person. The dates proposed work well for them. Jaeger wonders aloud if there are any other dates that would work better for others.

Yanthor notes that nobody else has suggested anything else. He also remembers a meatspace conversation with Linknoid in which Linknoid described his plan to take his one week of vacation for 2007 on May 21-25 to coincide with the Megafest. Nemo also gave a 90% verbal commitment to Yanthor via phone last week that he was planning to come for the 23rd - 28th and possibly stay at Yanthor and Anya's a few days longer. Yanthor also had a meatspace conversation with Humblik in which Humblik expressed support for the proposed dates and location.

Thus it seems we have a consensus election similar to the elections in the Republic of Haven--with blocks of voluntarily disenfranchised voters voting via proxy.  ;-)

Also, recently after UU church, Signalman expressed an interest in attending and Yanthor made no promise other than to ask the others if his attendance would be welcome.

Jaeger indicates that he would be happy to have Signalman join the Megafest. Kiesa also has no objections.

Jaeger wonders who has seen Children of Men, which could be a worthy Megafest movie.

Bitscape announces with regret that he will not make it to this one. This is due primarily to factors relating to distance. (The downside of moving to a beautifully remote location.) Extra time off to drive + high gas prices + recently starting a new job + less than 1 month notice = too much cost and hassle. Hopefully next time.

Friday, 25 May 2007 is the thirtieth anniversary of Star Wars. We could do something to celebrate the event.

How about Pirates of the Caribbean: At World's End?

Because, really, can you have too much of Johnny Depp swaggering and pontificating in eyeliner? [1]