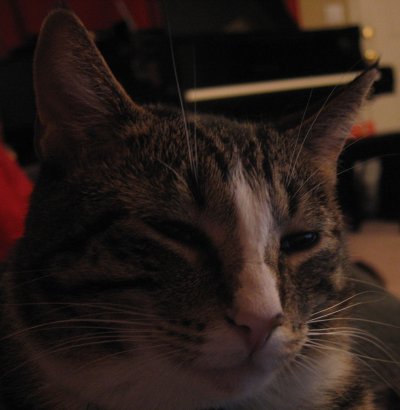 This article was pillaged from the Uncyclopedia article "Cat5".

Cat5 (or more formally, Cat Five) is a cat residing at monarch.festing.org with ties to the Russian mafia and Cat5 Industries.

Cat5 has an active social life and career, with interests such as:

CAT5 has started an armature volleyball league, apparently with an interest in the aerospace design of warhead-carrying volleyballs.

Although it is unknown where Cat5 began her long paramilitary career, she has had spurious ties to leftist rebels in South America, KGB dissidents, and an unidentified operative known only as Jaeger. (Some speculation exists that Jaeger is another name for Ted. Ted Kennedy perhaps. Or Ted Theodore Logan.) Badly translated 18th century Spanish history books point to Commodore Jaeger as the one who first introduced CAT5 to the supervillian evil group, CATS.

Cat5's military strategy is a hybrid between total war, war of attrition, and just keep fighting. That is, Cat5 attacks both military and civilian targets (especially civilian targets) with all weapons available to her. As with a war of attrition, CAT5 hopes to wear down her enemy to the point of surrender, at which point she just keeps fighting. Winston Churchill described Cat5's tactics as "total madness" and Donald Rumsfeld wasn't available to comment. Donald Trump noted that Cat5 was "An effective leader, with an eye for capitalism and hostage-taking."

Cat5's official funding comes from the manufacturing and support of printer heads. Although this is certainly one monetary well she draws from, it is widely speculated that she has a secret business smuggling precious stones, especially gems, through the public library system.

Cat5 insists that her agents, not her, are responsible for any mistreatment of her enemies, or agents. It should be noted that under the rules of the International Criminal Court, Cat5 is exempt from any prosecution.

Adversaries and other rivals

Cat5 has had a long string of inconsequential enemies. All were vanquished with minimal effort.

All but one, that is.

Cat5's only rival of note is Willow. Cat5's human servants were inconsiderate enough to bring home another kitten, unaware that Willow would work to thwart Cat5's efforts towards world domination.

Cat5 holds an impressive collection of awards, accolades, and professional honors, most of which were stolen.

In the 2004 Presidential Campaign it was reported that Democratic candidate and total wimp John Kerry threw away metals he received for his service in Vietnam during an anti-war rally. However, John Kerry may have been passing those honors off to Cat5, who has now come into possession of three Purple Hearts and Silver Stars. When asked about the metals, she said she appreciated her country's offering of the purple hearts, but she preferred purple heads.

CAT5 has made a difference by contributing her time, energy, and talents to the I-25 Adopt-A-Highway Program where she helps remove graffiti, gather trash, and bury land mines.

CAT5 started the volunteer organization Big Brothers, which offers troubled youth mentoring and guidance as well as recreational activities, such as Vollyball and planting eavesdropping devices.

In 2003, Cat5 took the Academy Awards by storm when she burst through the ceremony and stole Kevin Spacey, award and all.