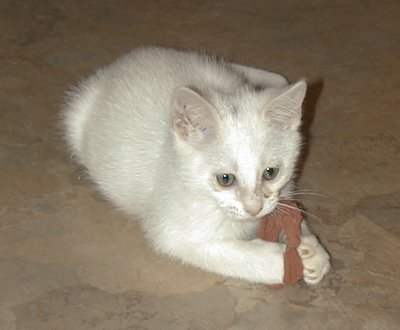 Although only a kitten, Willow is the primary agent responsible for preventing Cat5 from achieving her goals of world domination. Willow lives at monarch.festing.org, where she keeps an eye on Cat5.

Little is known about Willow's early kittenhood. (She is, after all, only eleven weeks old.) What is known is that she joined the Feline Autonomous Auxiliary Intelligence Service (FAAIS), the intelligence arm of the secretive World-Domination Subversion Agency (WDSA) and quickly achieved the rank of Kitten Colonel. An ambitious officer, Willow gained recognition among her peers and was assigned to the case of Cat5.

While investigating Cat5's gemstone smuggling operation, Willow became trapped in the library book drop. Willow's fellow kitten-agents were captured and sent to the Humane Society, but Willow was able to evade capture. Using her inate kitten cuteness, she managed to infiltrate Cat5's home. Despite Cat5's best efforts, the human house-servants have not yet caught on to Willow's true nature.