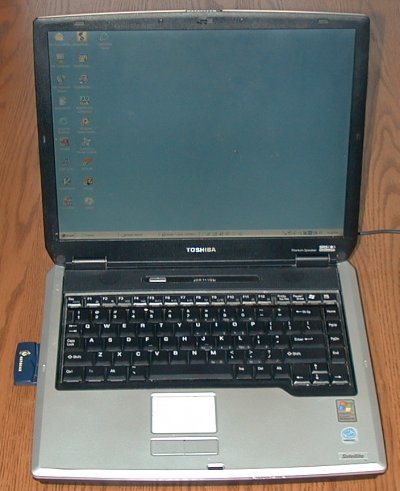 Blue Kiesa was Kiesa's primary notebook from July 2004 to March 2007. The computer was purchased in July 2004, replacing Elssbett. In early 2007, Blue ran Ubuntu and hosts Windows 2000 in a virtual machine using VMware Player, before being replaced by Adara in March 2007.

Blue Kiesa never really worked perfectly. It shipped with a crippled version of XP Home with a Toshiba shrink-wrap license forbidding us from rejecting the Windows license and demanding a piecemeal refund. Kiesa didn't want to use XP Home (especially since we couldn't dual-boot without hassle), so she nuked XP Home, installed her copy of Windows 2000, and dual-booted with Linux. This worked well enough for a while, but Blue tended to have overheat, which caused all sorts of exciting stability problems. In September 2006 she gave up entirely. Part of the problem seemed to be that we couldn't find the correct chipset drivers for Blue for Windows 2000, which should have been able to control frequency scaling to mitigate overheating. Jaeger hypothesized that we might be able to run Windows inside VMware Player, providing full access to iTunes and the audio books Kiesa downloads, while using the frequency-scaling support within the Linux kernel. This seems to work. [1]

In March 2007, Blue Kiesa resumed behaving badly, even with the virtualization hack. She finally died on Saturday, 10 March 2007; Kiesa immediately began shopping for a replacement in earnest, and acquired Adara, a refurbished Dell Latitude D620.